Man In The Fog

Friends,
Didn't expect to take so long to produce this first post of the new year, but then things never quite happen the way we'd always like them to, do they? Contrary to my imagining, the new year has not yet seen me sparking into action with a great new project to work on. A swirling mist of vague intent has enveloped me which I'm currently trying to disperse. Workwise, I need to be sure of a direction to go in that will take me somewhere I want to be - and a place that really needs me to be there. Not neccessarily the same thing. Meanwhile, I'm being as useful as I can be to the medium I'm devoted to by continuing my assistance to Cartoon Classroom. If you're a new visitor to this site and haven't seen my postings covering this subject before, www.cartoonclassroom.co.uk is where to go to check it out. Depending on the nature of your circumstances, it might be of use to you.
Though I'm scheduled for no more show appearances until late March, some of my work will be on show at an exhibition in New York's Museum of Comic And Cartoon Art from March 12th to May 30th called Neointegrity : Comics Edition. I'll let you know more about it as we get closer to the event. The pieces on display will be the 8-page story ' Man In The Fog ' - a collaboration with a past writer pal of mine from fandom days, Robert Curran. It appeared in Eclipse's Tales of Terror title in 1985, and was an homage to the kind of stories and art that I admired greatly from the early days of the Warren comic magazines ( and an unconscious homage to Algernon Blackwood - but that's another story I'll fill you in on later... ) It was also one of my first experiments in technique - I asked for the b/w art to be printed in sepia tones to evoke the atmosphere of an old Victorian photograph. The story hasn't been reprinted since it's first appearance, but it will be published in it's entirety in the exhibition catalogue. Below is the first page and a semblance of what it looked like in it's sepia incarnation.
Hope you're all having a great year so far - and I wish you the very best of luck for the rest of it : ) 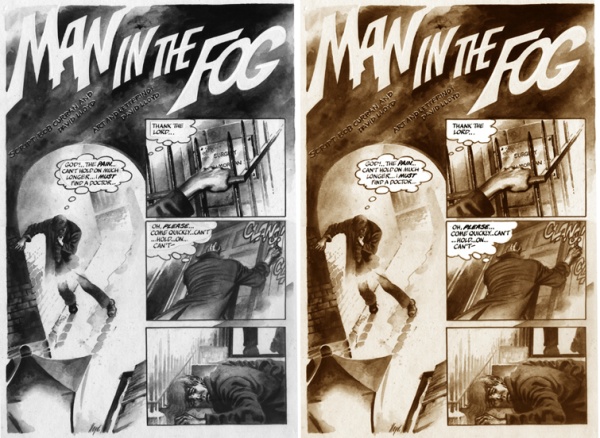