As one of its supporters and general helpers, I'd like to enlist your assistance this posting in the imminent launch of a new website ; and encourage you to register on it if you're a professional cartoonist/comic creator, or aspire to being such, or are interested in the study of cartoon art as a teacher or an educationalist here in the UK or Southern Ireland.
Cartoon Classroom is the inspiration of Steve Marchant, a cartoonist and teacher of cartooning, who began his tutoring career at The London Cartoon Centre - a charity-run, full-time evening school of cartoon and sequential art creation, which I was connected with for many years before it ran out of funding. Efforts to raise cash for it were continued until it became obvious the Centre could not be resurrected and continued for any worthwhile period. It then became a matter of deciding whether to return these donations to their source, or - at the permission of the donors - to use them to initiate something else that might generally help the cause the Centre espoused.
Steve decided that a good extension of the service the school once offered would be a website which had the main aim of centralising access to all the various means of studying cartoon and comic strip creation which exist throughout the UK and Southern Ireland .

The full list of its aims are as follows :

1) To put educational institutions in touch with cartoonists/sequential art creators who teach this specialised art form on a part-time or full-time basis in the designated area.

2 ) To document whatever is available through art colleges, workshops, recommended manuals and other media, which can help anyone studying to be a good cartoonist/comic creator.

3 ) To list all accessible museums and galleries which have comic/cartoon art on public view or in their archives, and to encourage those without any to acquire examples from local notable creators.

It's our intention that only a fraction of the information required for the site's operation will need to be supplied to the site by us - its administrators. Instead, details of courses, collections, locations and availability of tutoring will be added directly to the site by all those who use it. Ideally, it should be almost self-generating.
The most important thing for the site's effectiveness is that it offers comprehensive coverage of it's target area ; and for this to be achieved, we initially need to maximise our communication to all those institutions and individuals who'll make use of the site. Prior to it's coming launch, this is the toughest job we have. The site's initiators and supporters have time-consuming jobs and responsibilities which limit the hours we can devote to phoning and emailing - so the more work that can be done by simply spreading the word about it, the better.
If you can, please help us by contacting any person or institution you feel would add content to our database, and/or make use of it. To register an interest, and/or register a wish to enter Cartoon Classroom's database, is easy - go to www.cartoonclassroom.co.uk. Full information on what you have to offer can be entered when the site launches on October 3rd at the Birmingham International Comics Show. Email to contactcartoonclassroom@yahoo.co.uk.
Thanks for taking the time to read this, and I hope you'll be able to help us make Cartoon Classroom a success.

Friends,
Just a note to let you know there's an excellent Heroes tv series print on ebay attemping to raise money for the excellent charity, Draw The World Together. It's drawn by the excellent Mike Collins and signed by many of the excellent cast of the show! Excellent, eh?

Friends,
On the way back from my usual trip to sunny San Diego Comicon, where I was lucky enough to meet some old friends and new ones, but, of course, not everyone I planned to meet in the hubbub of the hectic activity that always surrounds the show, I stopped at Chicago to do a signing for the Amazing Fantasy stores I detailed in my last posting. It was a real pleasure to meet the manager of the stores, Lori, and their owner, Joe, and all the other folks who helped at the stores and came to the signings and meeting after it. More than my usual thanks go out to Lori for actively promoting Kickback, the graphic novel of mine which forms so much of this site and yet is still unknown to many people who would readily leaf through it with understandable curiosity - and even buy it - if they just knew it existed.
Had time to take some pics of Chicago - a more ventilated and pedestrian-friendly city than I expected to find - while I was there. Among them this extraordinary 20' 3D copy of the famous painting American Gothic ( with added legs! ) on Michigan Ave. And this great fountain on Lakeshore Drive. Great museums there, too - one with the biggest T Rex that's ever been found, named Sue.
Lastly, for all you UK folk, there's a season of Terry Gilliam movies at the BFI from August 2nd to 31st, presaging his latest work. Go to http://www.bfi.org.uk/whatson/bfi_southbank/film_programme/august_seasons/terry_gilliam for full info.
More posting soon. And remember to buy Hero Comic when it comes out - it's for a great cause : ) 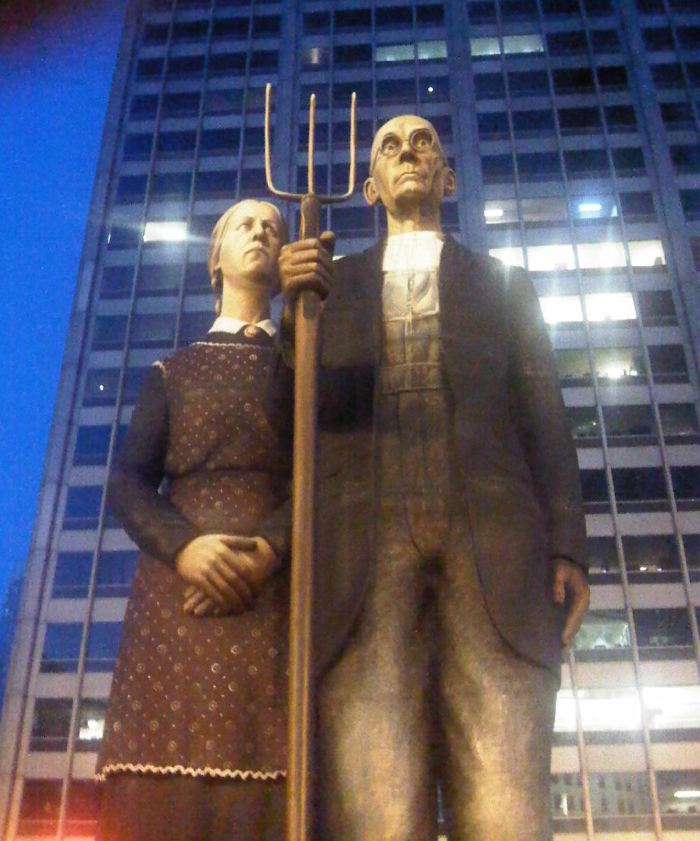 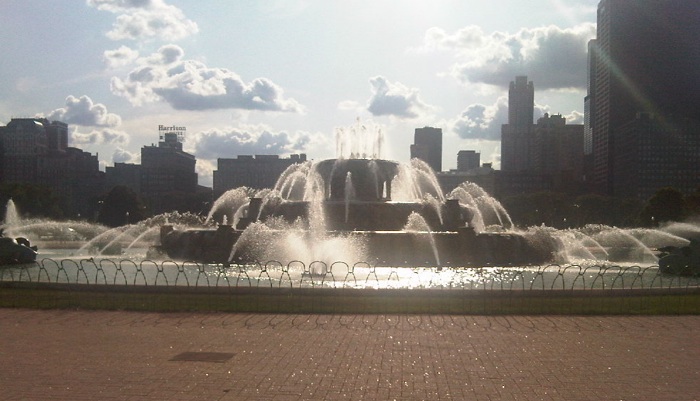