Arthur C Clarke died recently, and though I wasn't a dedicated fan of all his work, I amired the short stories of a collection called The Other Side Of The Sky, which was one of dozens of paperbacks I was buying in the Sixties that fed my hunger for sf and fantasy. This strip is an adaptation of one his stories Security Check. It's the first real strip story I ever did. There was no stopping me from then on. I was addicted. As you can tell, at the time I was massively influenced by Steve Ditko. Of course, I still am. But then I was literally fascinated by his work and wanted to somehow emulate what he did. The way he drew creases and folds in clothes was astounding and beautiful to me - art in itself - and I tried to copy it, not knowing what the hell I was doing, of course. My drawings were a hymn of praise to him.
The original story is a clever one and almost about Arthur C Clarke himself, because he is famously supposed to have come up with the idea of the Early Bird communication satellites before the space scientists did. Like the sinister agents in this story, some US intelligence people may well have thought Clarke's pre-empting was the result of a security leak... 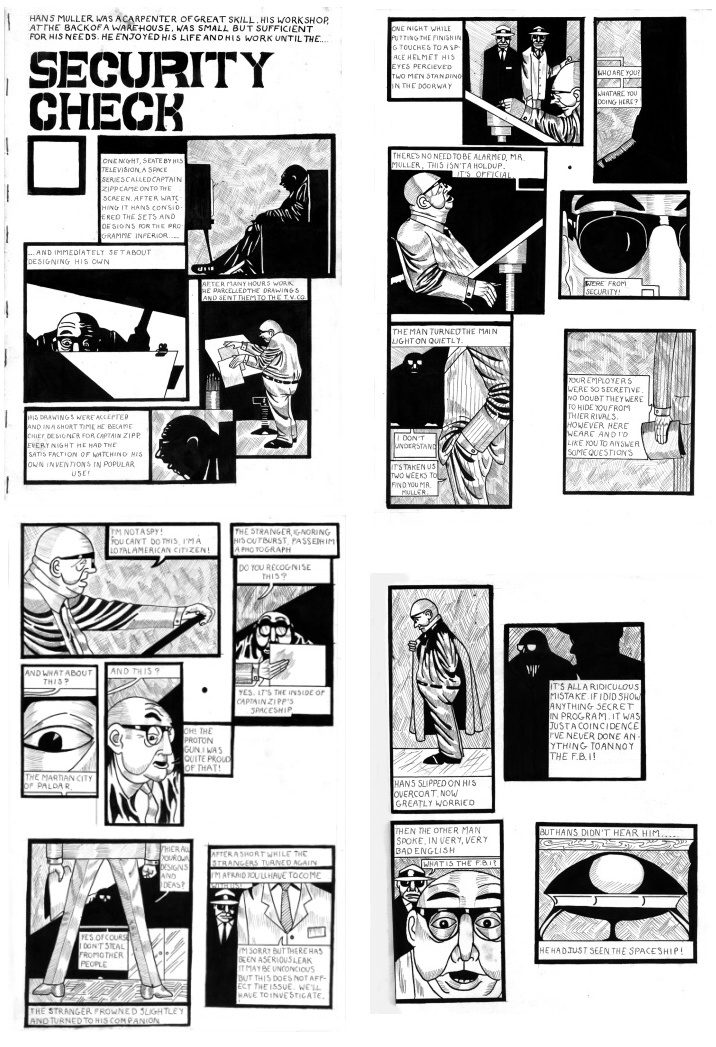 The New And The Old

Friends,
When I was training to be an artist in the centre of London, a stones throw from St Paul's Cathedral, I would spend some of my lunch hours visiting two areas of market stalls. One was in Leather Lane - a famous market street in the town - where a stall sold old copies of what were colloquially called ' monster magazines '. I'm talking things like Famous Monsters of Filmland, Monster World, and the classiest of them all, Castle of Frankenstein, here. For those of you unaware of what these things were, please do a search on them. They were a source of inspiration for many of my tainted generation.
The other area of stalls was in Farringdon Road, a block away from Leather Lane. Here they sold old books. I never discovered exactly how far back they went in years, but they went much, much further back than the stall in Leather Lane, which sold brand new books in comparison. On these stalls you could find things that looked like the Gutenberg Bible. My interest revolved around old compendium collections of Victorian and Edwardian magazines. It was like time-travelling to touch them. I bought a book of the Strand magazine, with the many adventures of Sherlock Holmes in it, featuring the illustrations of Sidney Paget. I bought an omnibus of a family magazine called Sunday At Home that was choc full of great illustrations - etchings, engravings, the sort of thing no-one did anymore, or really knew how to do properly again. These books were cheap but were treasures for a guy like me.
In a flea market in Brighton at the weekend, I felt like I was back at those stalls for a moment. I found a compendium of The Windsor Magazine from 1910. Still cheap. In it, as expected, were some excellent illustrations to the stories, and a surprise as well. A signature on one of the pictures said Cyrus Cuneo. It's an unusual name to find for an illustrator of an English magazine at the time, and the only other place I'd seen such a signature was at the bottom of the many great paintings I'd seen in the past from the famous British artist, Terence Cuneo, who, though generally noted for his skill at portraying railway engines, was a painter of enormous talent who'd been honoured by the Queen. Could this artist Cyrus be related to him, I thought. I did a search and found that indeed he was. He was the father of Terence Cuneo. You can find out more about these two great artists if you go to www.terencecuneo.co.uk.
Below is one of the b/w illustrations Cyrus Cuneo drew for The Windsor Magazine. Steerage on a ocean-going vessel of the time. An illustration for a serial called Hawtrey's Deputy. Good, eh? 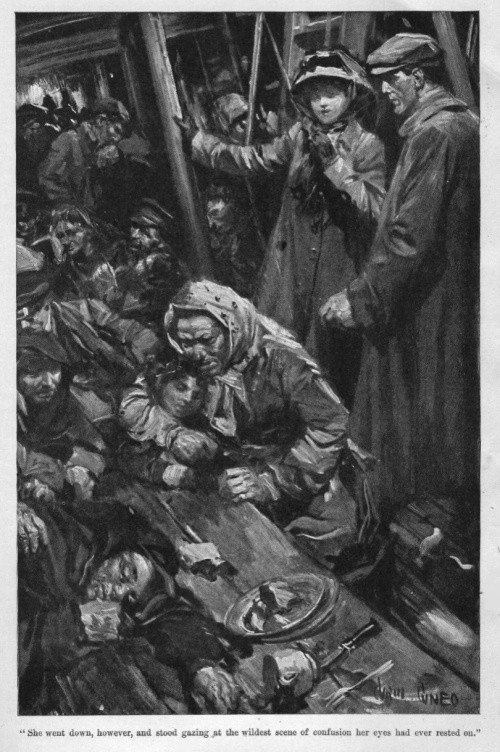