Just been apprised of a very excellent fan ' trailer ' for one of British comics most excellent creations - Slaine, the work of superb writer Pat Mills. Pat's worked with a bunch of folks on this series about a Celtic hero of past times, including the amazing Mike McMahon, the incredible Glenn Fabry, and even little old me for a short sprint in a gaming book ( as seen below ). But the artist who made most impact on it, and kick-started his career with it was the free-wheeling Simon Bisley. Slaine the Horned God grabbed a host of fans and still grabs them - and one of them put together a live-action trailer for a movie I'm sure many fans of the series would dearly love to see made of the strip, and it is now available to see on YouTube. Of course, in the wake of 300, such a movie might be an emminently sensible thing to get off the ground. I only hope the publishers of Slaine have as much energy as the creative fan who put together this cool-looking piece of filming, and take a hint from it, if they are not already trying to make the most of one their most successful and enduring characters.
The trailer is at http://www.youtube.com/v/nRIPAsbhZpM. 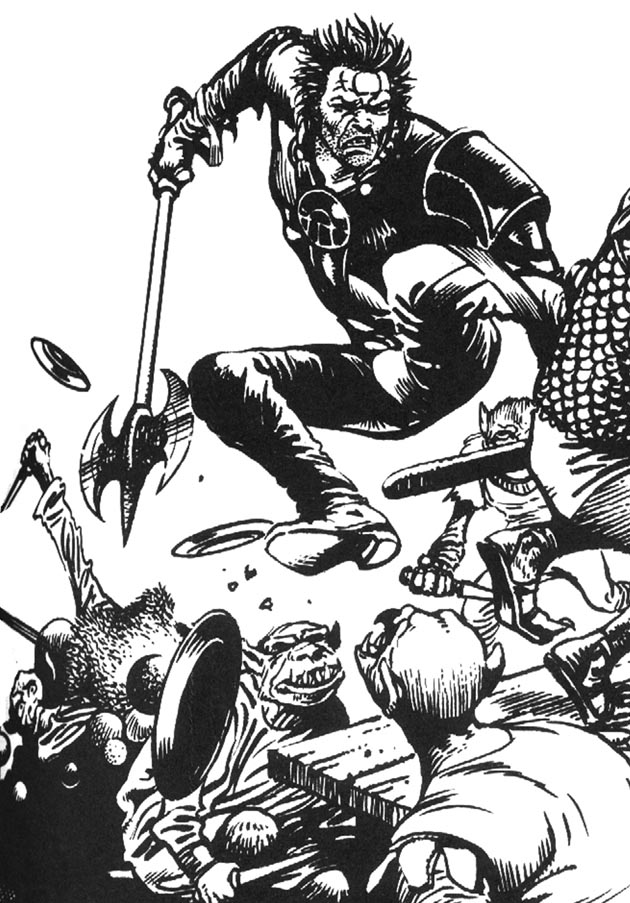 A bunch of things to cover this time, folks, to keep you clued in, as I endeavour to triumph over the intimidation of a deadline I'm running to.

First, the cover to the latest Elephantmen, from publisher Active Images is my latest work to see print, with an added bonus on the inside flip version - but I won't embarass the publisher about it too much, because he's embarassed enough about it already. Intrigued? You'll have to buy it to see what I mean. It's a good book you should buy, anyway. Trust me. And I enjoyed doing the cover for it. 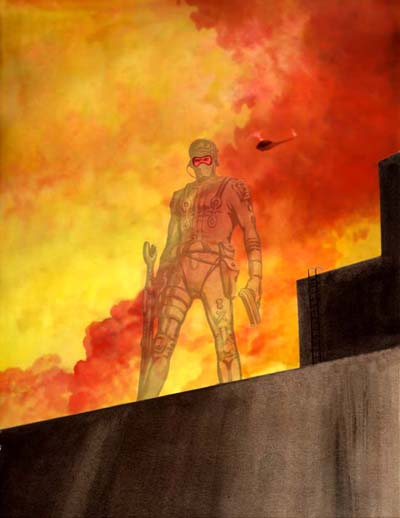 Second, I was invited to do a phone interview on comicgeekspeak.com by Peter Rios, Bryan Deemer and the rest of the guys, on the 20th - broadcast on the 21st - and enjoyed it greatly. Good to feel real enthusiasm for Kickback coming from everyone on the show. Such encounters always alleviate my displeasure at knowing how long a journey Kickback still has to take to reach the audience I reasonably expected it to. You can access the chat via the site, and, if you haven't come across comicgeekspeak.com before, you should make a regular date with it.

Thirdly, the thing I was working on just before Christmas, but effectively sworn to secrecy about talking of last year, was an Asterix story. Just a two-pager, written and drawn as my contribution to a special tribute book in honour of the Asterix artist, Albert Uderzo, who's 80th birthday it was being published to celebrate. I'd been invited to participate in the book and was honoured to have been asked to do so. If you don't know about Asterix, it's one of the most successful French comic strips ever created, running for decades across a global marketplace and, most significantly in my view, reaching as wide an audience of adults as children.
I submitted three stories for the editors to choose from, and they plumped for a kind of Prisoner satire that put Albert Uderzo himself in the village he had created, without knowing why he'd ended up there... The tribute book is yet to be published in English, but here's a couple of frames from it.

For those of you unfamiliar with the British comics market, who might be familiar with the great amount of talent the country contributes to the business worldwide, it may come as a shock to you know that we have only ONE annual comics event. The only opportunity that aficionados of the strip art medium and colleagues in the industry are given every year to meet their compadres in one place at one time. I certainly wouldn't miss it unless it was impossible to attend it, and I'll be there once more in the city which hosts it, Bristol. And it's tomorrow! And on Sunday. Check out www.comicexpo.net for details.
If you want to take notice of this late notice - if you haven't booked for the show already - and brave what looks like being a blustery, showery time in a classic English Spring weather weekend to come along and say hi, my schedule is seen at the foot of this entry. And, of course, there are many other artists and writers who'll be there, including one of the greatest British strip artists in the world - the astounding John M Burns, whose work is right here.. 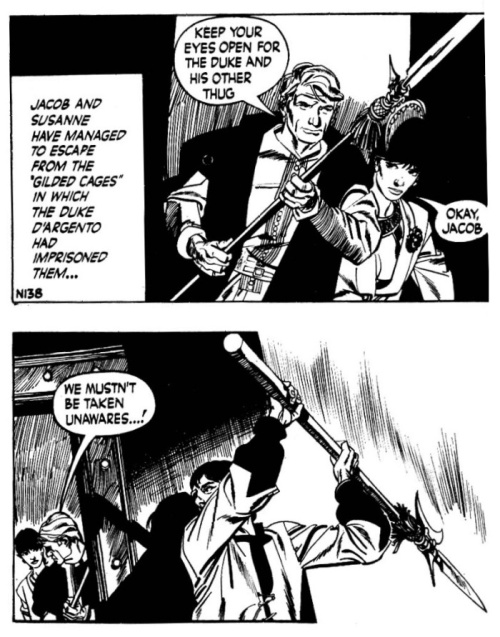 SAT :
Panel at noon til 1pm :
THE BIG 2 Vs THE REST OF THE WORLD!
with DAVID HINE + DAVID LLOYD + TONY LEE + PAUL GRIST & JAMIE McKELVIE

Friends,
Here's pics of the V exhibition in Andorra, which is not a part of Spain, as I ignorantly stated in my last entry, but is a country in it's own right. A very nice country. Mountainous country. Perfect for a skiing trip - if you like risking injury as part of your downtime - but an astounding experience for the senses otherwise. One way to reach it is by bus from Barcelona airport. It takes a couple of hours, but when you get off the inevitable motorway onto it's winding roads and rocky landscape, it's a magnificent sight. I'd show you pics of it's scenery, but you can get those from better sites than mine for such things, and with better pics than I'd supply ; and, after all, this site's to show you the stuff you can't get from tourist information.
Below are pics of the V/David Lloyd exhibition in situ. Mine was only one of several, which were all cleverly linked together, so that visitors could wind in and out of them all, seeing a wide range of styles and types of work. This was a great idea, for it encouraged folks who might have only been coming to see one artist, to visit the work of another. Many exhibitions at such venues are spaced far apart from each other, so less popular artists get less viewers.
There was a fantastic range of artists on show - go to andorraonline.ad for a full list. Do yourself a favour and check them all out with a search.
As ever when I visit such events abroad, I wish we as a country had enough love of strips to make such things more possible here. But that's another story. 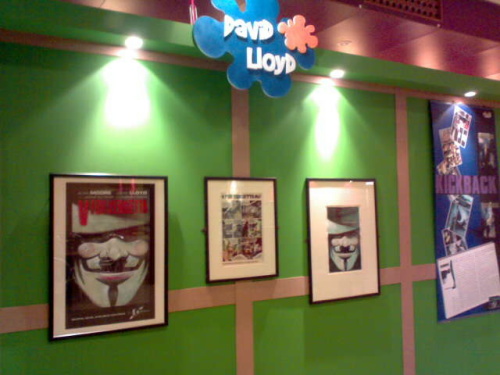 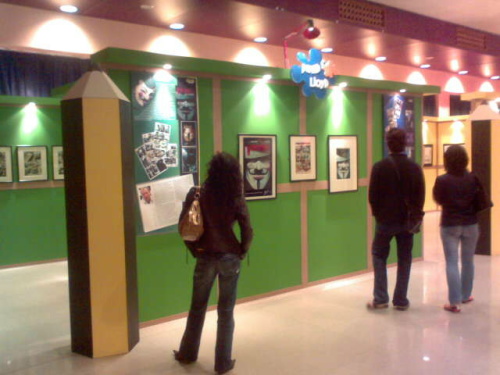 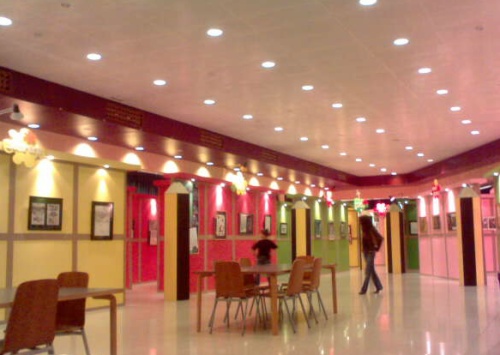