Friends,
Next stop in my travels is Hautvillers in France for their second comics festival, BD-Bulles. I'll be there this weekend from Friday to Sunday - as will the amazing and extraordinary Vendetta touring exhibition detailed in a previous entry on this site - so if you're in the area, please come along. This festival is held in the Champagne region, so there couldn't really be a much better place to pop along to for a sketch from some great artists from the Continent and one from little old England.
Among other guests at this ideal meeting point for aficionados of the medium are Bruno BELLAMY - DAV - Elvire DE COCK - Juliette DERENNE - Bruno DI SANO - Jean-Louis DRESS - ESTEBAN - Thib GORDON - Antonio LAPONE - Olivier MARIN - Pascal MILLET - Pascal REGNAULD - Jean-Marc STALNER - Edmond TOURRIOL- Luc TURLAN - Virginie VERTONGHEN - Marc WASTERLAIN - WYLLOW.

Greece Is The Word... Then Oranges, Then Apples

Friends,
This weekend I'll be in Athens at Comicdom Con Athens from 4th-6th, April.
It's the first time I've been in Athens for 18 years, when I visited on a day trip from Pireas, where I was staying at the time on a two-week attempt to cure incipient workaholism. I'd just headed there for the sun, really, and Greece - and Crete before it - had it in spades. I really hope it'll be shining there again. From 4.30-6.30 on Sunday I'll be in an interview/QnA/signing session with Mark Buckingham, and no doubt be around at other places during the event. If you're around, come and say hi, and pick up a copy of the Greek edition of Kickback, which will be launched at this event.
Then the week after next, I'll be at the one-day con at Tampa, Florida, on Sunday, April 13th, at the Doubletree Hotel, 4500, West Cypress St for the whole day, which might be closer to home for many of you!
After that, I'm right on to the New York Comic Con from Friday, 18th -20th, April. Signing times are 4-5 on Friday, and 3-4 on Saturday at the DC booth, and 11am for early birds on Sunday at the Dark Horse stand.
Look forward to seeing any of you who can make it out to see me :)
As a supplement to my last entry, I'm signing off with a nod of the head to another of my great influences - the great comics artist/illustrator Ronald Embleton, whose work in a story called Wrath Of The Gods made more impact on me than anything else. Here's a bit of it. 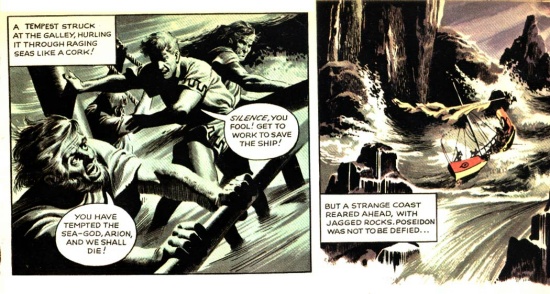