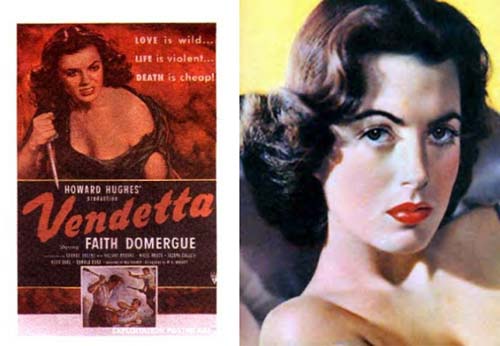 Couldn't resist this one. Faith Domergue - one of the great cult favourite actresses of Hollywood in the Fifties, and a very interesting narrator of her time in and out of glitter city, too - links Vendetta and Kickback by appearing in this movie you see at the left, her first, and, in her very next role, co-starring as a femme fatale in one of the great film noirs - ' Where Danger Lives ' with Robert Mitchum - which influenced the whole genre, and people like me, who were stimulated by the rich atmosphere of such things to originate works like Kickback. You should see ' Where Danger Lives ', if you haven't already. Vendetta? Well, never seen it. But if Faith Domergue's in it, it must be worth a look...
Next stop : Some excerpts of pencils from some V pages and the finished inks, together with other previously unseen working stage material from Vendetta. Shortly. 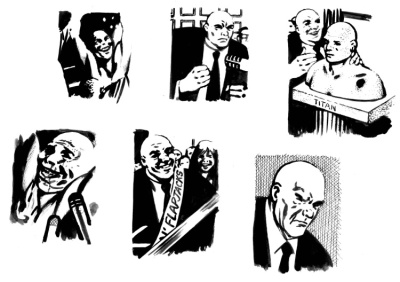 The next thing waiting in the wings from me - the first thing I worked on after Kickback - is a serigraph I produced for a Belgian publisher, which will be available to the French and Belgian market. If it was just an illustration - as most serigraphs are - it would probably be available to a wider range of countries, even though it'll be a limited edition print. But what I wanted to do with the commission - in my usual attempt to be a clever-clogs and try something different - was to tell a story in the picture, so it combined an illustration with a kind of strip concept. I think it works - though the judgement of buyers will decide. The above pics are working drawings for it, which formed part of series of framed boxing newspaper front pages, which tell the story of a famous prize fighter from his earliest triumphs to his possible destruction. They were designed to be reduced considerably in the process of constructing the piece, which is the reason for the bluntness of the treatment.
I'm not at liberty to show you a preview of the final work, but when I get word of the publishing date, I'll let you know it. Even though the message of the serigraph isn't understandable unless you read French, you might still like to part with your cash for one. Though I took a risk with it, I'm very proud of it and it'll look good on your wall, I promise.

Folks,
' My first entry ' this should have been called but I thought that sounded vaguely rude...
Anyway, what this is all about is news to many of you outside the UK, but is more widely known here.
At a time just before the movie's release here in the UK, myself and my co-administrator in an association of artists and cartoonists we have here in England called Cartoon County, decided it would be a good idea to stage an exhibition of the original art of ' V For Vendetta ' as a project of the organisation. In the recent past we'd put together a tourer of the great Leo Baxendale's work ( one of our finest and most innovative cartoonists - check his work out on www.reaper.co.uk ) and before that, a Hogarth Anniversary tribute exhibition, which toured as far as Chile.
I didn't have much of my Vendetta art left, but what I did have was more than enough for an exhibition. 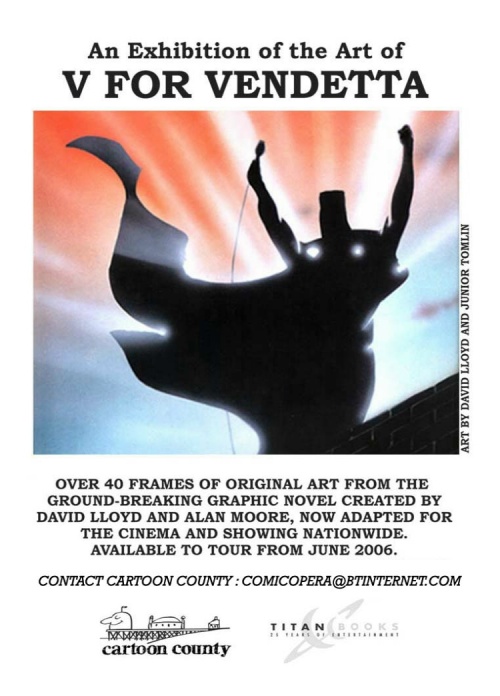 It was first seen for a two week stay at the Newsroom Gallery in central London - a prestigious venue attached to the Guardian newspaper, which specialises in political cartoon exhibitions and photography. Then it moved on to the University of Kent in Canterbury, for a showing at a study centre for cartoon and caricature art - http://library.kent.ac.uk/cartoons/. It's next stop was Barcelona, for the period of the Convention there, and then Avila, in Spain, for the period of another festival ( you know, they have comics festivals all the time in Europe at one place or another, and they're all assisted with finance from the local area - they have an appreciation of the cultural value of strips which seems impossible to awaken in the local arts funding bodies of most British towns and cities, even though we have great talents in that field of art who've created works that are appreciated across the globe ... ) But back to the exhibition... It'll be moving on soon to other venues, as yet unspecified, but it is - as you'll see from the advertisement here - available for hire to any and all qualified venues ready to meet it's hire conditions. Details of these can be obtained by contacting Cartoon County via it's website www.cartooncounty.com.
Here are some pics from a couple of the tour stops, so you can see how creative some the designers of the exhibitions were in adding their own visions to the show's presentation.
The following three are from it's appearance at the Barcelona festival earlier this year 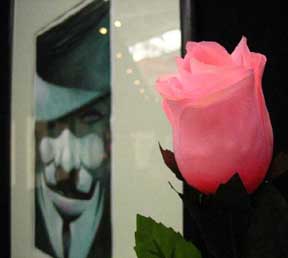 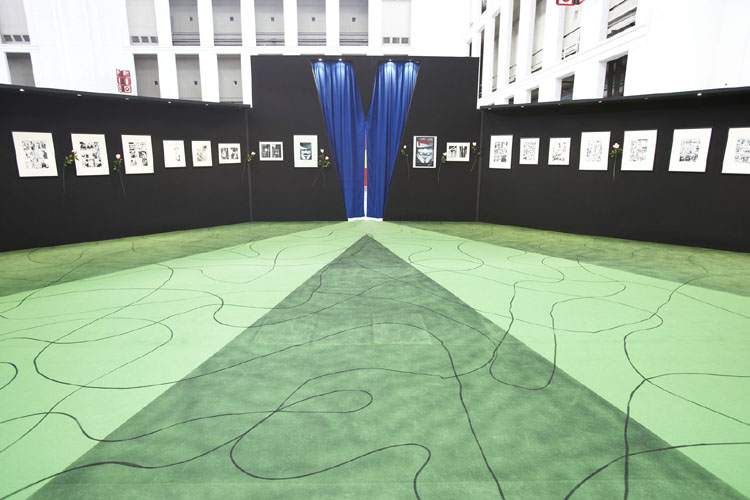 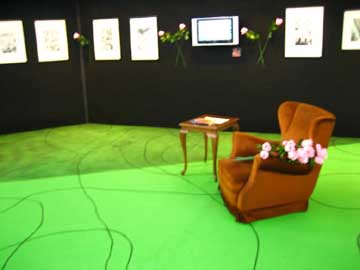 Those roses you can see, though artificial, are in fact Violet Carson artificial roses. You might be interested to know that the change to Scarlet Carsons in the movie was forced by rights problems. The designer here attempted to reproduce the effect of the floor design in the Shadow Gallery of the original series. This exhibition was in the middle of a convention hall - a blocked-in circular area, which could be entered throuugh the blue V-shaped curtained area or a red entrance directly opposite. A screen on the wall beyond the chair showed changing, enlarged frames from the exhibits.
Below are some pics from the display of the exhibition in Avila, Spain, which occurred at the beginning of this month. 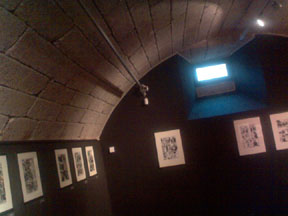 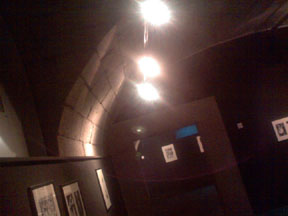 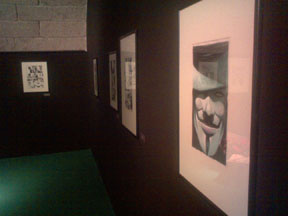 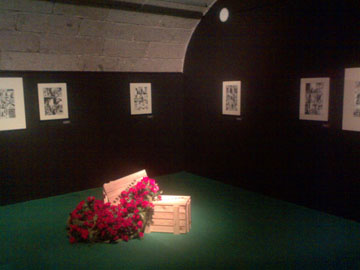 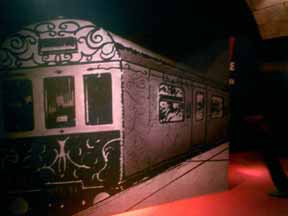 In Avila the designer was able to take full advantage of the vaulted cellar areas of the town's cultural centre to give the exhibition a really moody setting. This area is not only reminiscent of the Shadow Gallery of the movie, but also resembles the cellars of the Houses of Parliament, in which our historical hero and inspiration, Guy Fawkes, was apprehended in the winter of 1605.
That cellar area also echoed some of the structural qualities of the London Underground, which is why there is a great blow-up of the deadly tube train of Vendetta's finale on one of the walls!

These pictures do little justice to the skill of the designers of these shows and the amazing effects they evoke when experienced first hand.