The rough script for Kickback was written in 1999 and kept in a side draw while I tried to grab the time to get a publisher for it. If you're lucky enough to be a popular artist in this business, being able to find the time and the space to write something is hard enough, without having to find the time to sell it as well. 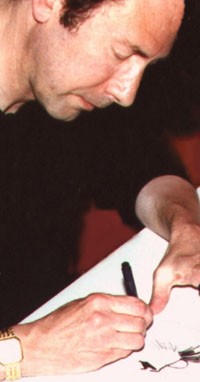 Its first publication was in France in 2003 because at the time it was written, that was the market which I considered would be most receptive to it. In '99, crime comics were not exactly a favourite subject amongst publishers in my usual place of work—the United States. Apart from Sin City, there was nothing making much money in that field. France had always had lots of detective books and, generally, a lot of time for crime. In addition to that I'd always wanted to do something for the French market. Having something in hardback—which is the common form of the French comic album—with a reasonably long shelf-life was something that attracted me. I was tired of seeing comic books I'd worked on with great dedication join hundreds of others fighting for short-term exposure in the comic stores of the US, where owners battle with tight-budgets and a bewildering choice of product every month of the year.

In 2002, Kickback became more than usually important for me to get published because just before it I’d done a couple of war stories with the great writer Garth Ennis. I did one that was set on board a destroyer and one that was set on a Lancaster bomber. They were realistic stories set in a real world, and, consequently, much of what was in them had to be accurately drawn with the aid of extensive photographic reference material and models. The results of doing that research were good pieces of work; but the intensive effort involved in creating them had removed from me much of the pleasure of drawing them. Kickback became a valuable opportunity to get that basic pleasure of creativity back for myself.

The setting of the story is the fictional US metropolis of Franklin City, in the state of New Plymouth. It's a fictional state but as familiar in all aspects as any other real US city you’ve ever seen portrayed in a film or an album... but nothing, apart from the revolvers, is completely accurate in structure to the real objects and settings of the real world. The cars are just regular, basic cars that could be Fords or Chryslers, or whatever. In Kickback, no extensive reference material stopped me fully experiencing the enjoyment of my work and fully experiencing the enjoyment of telling a story to the readers of the work.

Ultimately, I enjoyed creating Kickback more than anything else I've produced in years, because in taking the creative freedom I wanted for myself in making it, I had the support of my publisher: Jerome Martineau, of Editions Carabas. In consequence, he gave me that most precious commodity in publishing—trust—and he gave me much more of it than I have ever been given in the past. —DAVID LLOYD